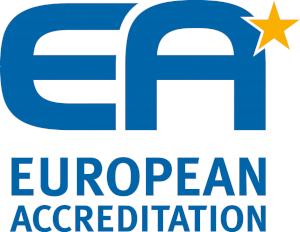 The European Accreditation Association has per country one member. This members are allowed to approve test laboratories for e.g. calibration according to according to ISO / IEC 17025. The approved test laboratories are so-called Notified Bodies.
The members of the Association will never issue a type-test certificate by themselves, but they guarantee that the certificates issued by their notified bodies are in compliance with the relevant standards.

Example: Type Test Certificate for Electrical Energy Meters, issued by KEMA, Netherlands
The responsible member of the European Accreditation Association is the Dutch Accreditation Council (RvA). The RvA has issued under the registration no. K006 and K009 the approval for DNV GL Netherlands B.V. to issue calibration certificates.
KEMA is operating under the umbrella of DNV GL Netherlands B.V. For recognition purpose still the old name “KEMA” is in use.
So a KEMA certificate is traceable to the European Accreditation Association.

By continuing to browse the site you are agreeing to our use of cookies.